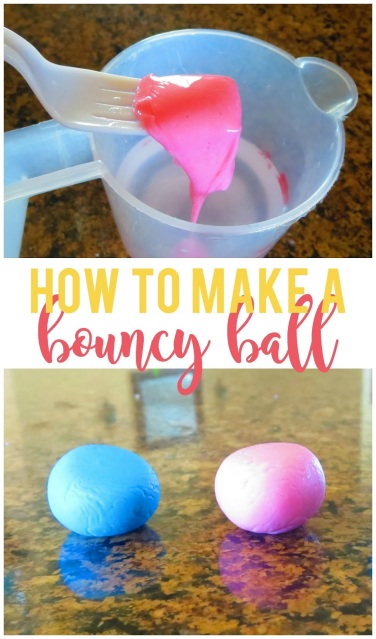 My 3.5 year old daughter is at the stage where she will take an afternoon nap about 50% of the time.  This means that some days I have kid-free time and other days I need to think of something to do with or for her that will keep her entertained so I can have some semi-kid-free time.  A while back I had seen a recipe for how to make a bouncy ball.  This sounded like something that my daughter would be interested in and I thought it seemed easy enough to do.   I did have to do a little planning ahead for this activity since it calls for Borax and white glue, which I didn’t have on hand.  I didn’t mind buying the items since I’ve seen other activities call for Borax and white glue is dirt cheap.  I already had corn starch and food coloring so when nap time didn’t happen, I was ready.

I had to be the one to actually make the bouncy balls since my daughter isn’t quite old enough, but she watched the whole process and asked questions about what I was doing.  She also chose the colors for the balls.  I would say that a child ages 5+ could do this (with adult supervision).

The first step is to heat the water up in the microwave (or wait for the tap water to turn warm).  Then you add the borax and let it dissolve.
In a plastic cup, mix the cornstarch, glue and food coloring.  Using a spoon, drop the glue mixture into the water.  You can put as much or as little as you want.  (I ended up with 2-3 balls of each color, each about an inch across.)

After 10 seconds, use a fork to get the glue mixture out.  It will have formed a soft shell, but the inside is still gluey, so squish it in your hands and then put it back in the water.

Count another 5-10 seconds, depending on the size of the ball and how much squishiness there was.  Take it back out and roll it between your hands until a ball forms.  It took me a couple of tries to figure out the best way to get the glue to form into a good, round(ish) ball.  I found that if the water had cooled off too much, it was harder to get a good ball so working quickly if you want more than one big ball is best.  Also, if my hands were too wet, it took longer to form the ball.
*The instructions mentioned using disposable rubber gloves and if I’d had some on hand, I think I would have used them because you’re working with glue, which is, by nature, sticky.  Instead, I just used my hands and had to wash them off a couple of times during the process.
My daughter was so excited when the bouncy balls were ready for her to play with.  She bounced them all over the kitchen, counters and wall.  Since they weren’t completely round, the direction it bounced wasn’t predictable which made it more fun for her.

*Note: When you’re ready to put the balls away, store them in a small container or plastic bag.  They will flatten a bit, but rolling them in your hands should bring them back into shape.
Homemade Bouncy Ball
Ingredients:
Instructions: